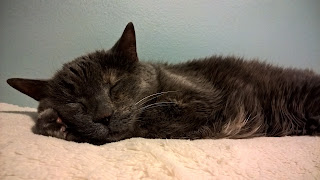 So I noticed last week that Lola was seeming a bit thinner then she had been, and had been drinking a lot more water then before, and at her age I know that can be a bad sign, so I decided to take her to the vet over the weekend.  Apparently she lost a couple teeth which I didn't notice (I honestly feel terrible I didn't notice, but I really don't look in their mouths very often either, and her teeth don't stick out like Kirzon's did, so it wouldn't be obvious they were gone, but I still feel bad) but they are all healed and ok, so the vet did a blood test and I got the results back today.  Unfortunately Lola is diabetic - not the best news, but still not the worst either.  She will have to have insulin shots, so I am going to have to learn to do that, but once she is on it she should do ok I think.  She is 16, and so I had prepared myself in case the news was worse than that (although I did hope it would be better than that of course). But the good news is it is something that we should be able to manage, and while I am not a fan of needles, for my babies I can learn to do what is needed.  Right now she is asleep next to me - one of her favorite spots is currently in use by another cat (on the purple pillow - which I have a picture of her on below from quite a few years ago now)  so she is on the couch.  She likes the corner (as does Trixie) and so she is pretty happy right now.  The good news is that they seem to have caught it early and she hasn't got any signs of any serious secondary issues that being diabetic could have caused for her.  Other than the weight loss (2 pounds as of right now - so not horrible since to be honest she could have lost 1 and it would probably have been a good thing) and she is thirsty a lot more, but other than that she is her normal, sleepy self.  She has never been much of a get up and play kind of cat - if you bring her the toy she will play, and if you bring her treats she will eat them, but she doesn't really get up and go out of her way to do any of that stuff, so her not doing much now that she is older isn't really that different then when she was young, so I am not sure if that is a sign that you would notice in a normal cat or not.

Anyway we will be starting her on insulin but if anyone has any suggestions to make it easier (I know people who have given treats after the shot and that worked well, for example) I would greatly appreciate it.  I am just happy it is not anything worse. 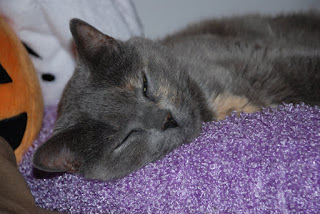 You will need to test her on a regular basis, it is extremely important. See if yiu can get Lantus insulin, it's the best. Giving the shots is pretty easy. Also, I would have her teeth checked by a specialist, someone with digital xray equipment. Sometimes tooth problems can cause an increase in the glucose levels.

It's so hard to watch our cats get old, isn't it? I want to suggest you get in touch with Connie from tails of the foster kittens blog. She knows a LOT about feline diabetes and can help. Her blog is http://www.kittyblog.net/ and her email is on the right side banner.

I inject when they are eating. They barely notice it. Once they realize that they are starting to feel better they do associate the injection with that, so they often are okay with it.

I have a lot of experience with 12 hour insulins, but vets have been prescribing 24 hour insulins which run a little differently.

home testing is uber important to get a handle on how the insulin is working within the cat and helps you dial in on the right dose. You can use human glucometers, just pick one and stick with it because they all read slightly differently, but all within the same tolerance. I use the walmart brand because the strips are cheaper. Some strips are a dollar or more, some are less. You are going to test a lot in the early days. "curves' need you to test every two hours for 12 hours (some people only go for six hours)

But most important, and the thing that could make all of this unnecessary, is a change of diet. Getting the cat off high carb foods and onto low carb high protein high moisture content food can greatly reduce if not eliminate your cat's need for insulin. It is the ideal diet for your diabetic cat as well as every cat. Check out the following websites, http://felinediabetes.com (especially the message boards that are frequented by people with a lot of experience with diabetes) http://catinfo.org (talks about the importants of a high protein diet)

I'm happy to answer any questions and point you in any direction that I can if you want to get in touch.

We haven't had to deal with feline diabetes here, but a lot of other cat bloggers have. Connie knows a lot, as does Janea from Paws and Effect (http://paws-and-effect.com). You are right - the news could be worse. Diabetes is treatable and once you and Lola get the hang of it, you will be able to manage it. Purrs to you both.

So glad you caught it early! Not a great thing, but certainly could have been worse. We haven't dealt with it, but I know there's lots of info out there.
I got a kick out of how you described her! We call Leo a lazy player because he would prefer you to wave a toy close to him or give him something, but he does get up and run after it for a while. But now that we have two of his (and Trixie's) sisters, we seriously know what lazy players are, lol! They barely run after anything, then lay down and wait for it to come into whapping reach!
We'll be purring and praying that you and Lola get good at the shots quickly and that she has a long time left with you!

Our Moosey is diabetic, and giving the shots is really easy. Connie is really knowledgeable about this stuff, and all the associated issues, so definitely get in touch with her.

We're sorry to hear about Lola's medical issues, but it's good to see how much sound advice you've received already. Good luck to you both.