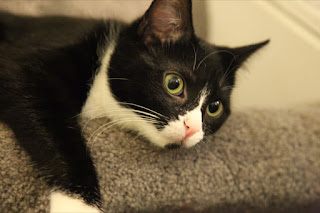 TRIXIE!!
I know it is tough to tell - like I said there are times I can't really tell to be honest with you.  The main differences are that Trixie has white fur around her nose, but of course you can't see that too well in the picture.  She is rounder than Virgil but again, in that picture it is hard to see that.  The one thing that you can use to tell it is her - her paws! 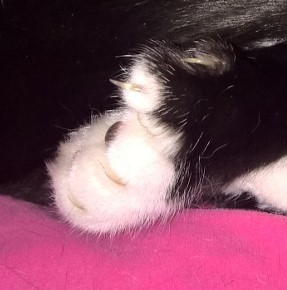 For those of you who didn't know, Trixie is polydactyl (so she has extra toes) and she is polydactyl on all 4 paws.  On her extra toes, her claws don't retract (which is normal for a cat that is polydactyl) so you can kind of see her extra claws sticking out there in the picture.  Some of you noticed the little bit of white on her face that is over her nose just peeking out - that is impressive because until you guys pointed it out I didn't even notice that part.
It is really common to see Virgil sleeping like that (he looks like a little curled up squirrel to me when he does - I have no idea why but I am sure I must have seen a picture of a baby squirrel curled up like that at some point) and usually Trixie is more splayed out, even when she is curling up a bit.  So I thought it was cute when she was sleeping like a squirrel and had to try to take a picture - luckily it was successful.
The other way to tell would be if you were familiar with my house - that pillow is on the couch I usually sit on - Virgil is totally Brad's cat and almost never sits by me, he sits by Brad on the other couch, if he is going to sit by someone, which almost never happens.
I am hoping to get some newer, better pictures of the kitties posted soon - I need to get my actual camera out and use that instead of the phone.
I build a scratching post for the cats about a week ago (we have a post that is about 3 feet high under the stair landing and I wrapped it in sisal - unoiled so cat safe) and while I was doing it they were all really into playing with the stuff, but now the only one who really pays any attention is Trixie - she actually climbed it the other day. It was so cute, but I didn't have my camera and was to far to get a good picture with the phone (and I knew she would jump down as soon as I got close).  So hopefully I can get a picture of that and you an see how cute she is up there.
Ok so this is a lot of posts this week - don't expect it to be quite this frequent, but hopefully it will be more frequent then it has been.
Thanks for visiting! We will see you soon!!
﻿
at 8/07/2015 10:30:00 PM

Yay! I was right!

I was wrong! Totally missed the claw! I love playing with Leo's extra toes/claws, they are just too cute! So hard to resist those poly kitties! MOL

My cats do not like sisal either! I wasted money on a scratching post. Max has just started using it after a year. It is hard to tell Angel and Kirby apart. Not as much as it use to be because he is long legged and she is short. She has a white leg and he does not and her tail is short and fat but his is long and skinny.