So as I am pre-writing this and scheduling it, I don't have an update on Lola (I will try to get one together for next week, but honestly I just published the post about her about 2 minutes ago, so I haven't got anything new right now) but I wanted to post a couple things.

First, I wanted to post a picture of my aunt and uncle's new puppy Petey - he is a Caviler King Charles Spaniel 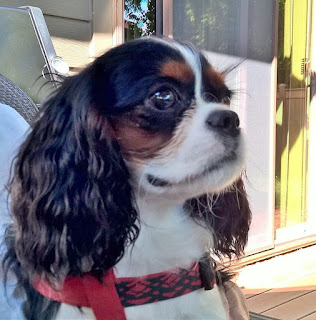 He is 8 months old and just super adorable.  My aunt and uncle sadly lost 2 of their dogs in the past couple years (one they adopted older and the other had a lot of health problems - but they both had great lives) and they were going to wait to get a new dog because they do still have their male, Baxter, and he is older so a puppy wasn't something they wanted to have since he is older and well, pretty much king of the castle.  But one day they were talking and my aunt said she would like to name their next dog after my grandfather (her dad) - Pete.  And my uncle, who is addicted to Cavilers, said that there was a puppy on the site he visits that was up for adoption - he was at a foster family but needed a forever home. They decided to fill out the application just to see what would happen (this was on a Sunday) and by Tuesday Petey was the newest addition to their family.  He and Baxter get along really well, and he doesn't bug Baxter too much to make him crazy.  And he is so sweet!! I think it was totally fate they were talking about that and then he ended up being just the perfect addition to the family.

So the other thing I am writing about is nail polish.  For those of you who don't know (which is most of you I am sure) I am kind of a nail polish addict. And I have been watching a lot of nail art videos (mainly from Simply Nailogical because she has cute kitties in her videos - they are her cute kitties) and I was inspired to do some nail art, and  I decided to order some new nail polish and when it came, I had it out on the table. Well apparently it is in bottles made of catnip or something because Virgil is OBSESSED with trying to pick them up.  I shot some video of it because he is so hilarious (please excuse the TV show in the background.) Hopefully the video will work (ok I decided to upload it to YouTube in case it doesn't work - you can see it at http://youtu.be/ljX7WUBLPMA if you can't watch it below.)  I don't have a ton of pictures right now because I want to take them with my actual camera but I can't find the charger right now.  So once I find it I will have more pictures to post.

Petey is adorable! I'm not sure what Virgil is thinking!

That video of Virgil and the nail polish is great. He certainly DOES seem enamored with it. :)

Happy Sunday to you!