So yesterday was one of our favorite sporting events - The Puppy Bowl! We watched it during the first airing (well, the cats and I did) and then would flip back later. Last year the cats were paying attention to it on and off and so this year I had high hopes - and I wasn't disapointed. Stella loved it - she watched the first and second quarter - the first from the couch and then up next to the TV, and the second from my lap. She is totally into it. And the funny thing is that later I had it on during a commercial, and she started watching it again! She even looked behind the TV to try and find the puppies (she didn't find the of course). The funny part is that Gus didn't even notice it. I think he was asleep the first time, and the second time it just didn't catch his eye (I still think he is not hearing everything from both ears - but I don't think he is deaf, just a little hard of hearing on one side). Lucky for me my video camera was nearby so I got some video of her watching. And then when she was watching later Brad took a couple pictures. They are kind of dark because the first time I didn't have the lights on, and didn't want to scare her off, and the pics because the camera is metering the TV along with Stella.  So below are the videos and pictures - they are pretty funny, especially when you see Stella's head moving when she is watching. Oh, and don't forget about our Contest - it is still happening! Be sure to check out this post - and leave your answers on that one too!! 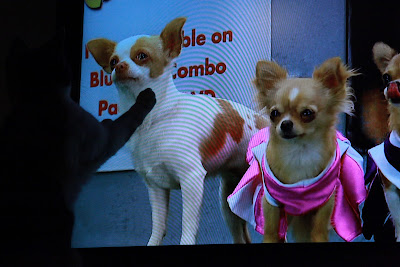 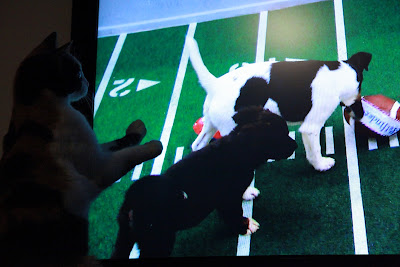 Aww..now is that cute or what? I've never seen this before (we don't have cable), but it sure looks ADORIBLE from the pictures!

Heehee, Stella! You are SO cute! Maybe your mom should get you your very own real live puppy! I bet the other kittehs wouldn't mind at all.

I'm just so very happy your mom can check her bloggies at work again! I've missed you all lots and lots!

Stella, you're so cute watching The Puppy Bowl! We didn't know dogs could drive cars either!

Stella, maybe next season mom can get you a jersey and one of those big finger things! You are SO cute!

Amy, we ADORED watching Stella watching the puppy bowl! That video is so cute!

And ... we can see ChrisMouse hasn't ended in yor house, 'cos you still have snow-men!!! MOL!

Awwwwww how gorgeous is that!?!? Awwww sweet Stella!!! You are so clever and bright and so intelligent!! And so cute too!!!

That was funny! Those commercials with the dogs driving had us rolling on the floor!

Oh how adorable! Stella, you is precious!

Yay you are back....very nice post and we'll look forward to keeping up...Mom is a Nikon girl too. She just gave herself a new Nikon S8100 for her b-day. She calls her Niki II.
Madi

Looks like you two had such a good time watching that Bowl. We don't get that channel so we couldn't watch it. Great videos. Have a wonderful day.

Memories of Eric and Flynn said...

You looked cute watching it Stella.

How cute that looks!

We watch TV too, and particularly liked the kitten half-time show!