First, I have to post an update on Shadow, who has been quite sick lately. Today they took her to the neurologist and got some good news! It looks like she has a massive ear infection but that is the only thing they found. She will have to be kept in a quiet, dark place to rest for a while, and take medicine to clear it up. It is so good to hear that they have finally found what is wrong and are now able to do what they need to get her fixed up.

Next is the Six Photo Game - I was tagged by Cheyenne Millie over at Millie's House. This one has some simple rules:

So I opened my 6th folder (cleverly named New Folder 6) and picked the 6th photo (which is called 07, but I delete really bad or blurry photos, so there is one missing). It was this one: 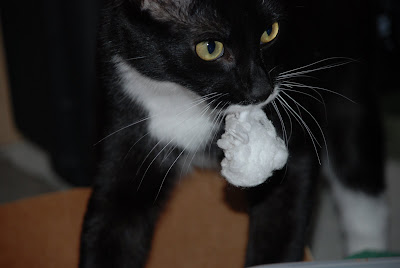 The story is that this is Virgil with one of his formerly favorite toys, a cotton ball. He would play with them until they got really gross with cat spit and I would throw them away. He loved to play fetch with them. I ended up getting some big pompoms at the craft store to replace them, because the cotton would always come off in his mouth after a while, and I didn't want him to swallow it.

So I am going to tag the following blogs:

The Adventures of Tober, the Thorntown Library Cat

A Wizard and an Angel - when they have a chance, since they are helping out Shadow with updates

The Adventures of Percy the Cat

So, I guess TAG you're it! I can't wait to see what all your pictures are!

It's so wonderful about Shadow! I guess the CB purring really helps!

This is a cool Meme. We will play next week! Love the picture of Virgil. Kirby loves q-tips.

Oh, Virgil is so cute!

Hahaha. That is so silly!
Melvin loves playing with any stray polyfill that may fall out of the bag. He goes crazy over it, but I'm worried that if he swallows it he'll get all plugged up.

And I would love to do a Meme like that. I may have to do it on my own tomorrow.

We are happy that they found out what is hurting Shadow,and that they can now help.

Thanks for participating in the 6th photo meme. That is a real interesting story and photo!

Hi Amy....oh my word....Madi and I are so honored by your tag!!! Thank you so much. We'll work on that this weekend. I wish I had a picture of why she has a perch. Right after we adopted her we realized she was going to be a very high flying kitty..within month she had learned how to jump through the banisters onto the top of our Grandfather clock..unfortunately she was also 'teething' and did a little chewing on the wood up there. Needless to say there was no time for a picture....The perch is exactly the height of the clock and near a window...no more clock perching.Thank you again and stay tuned. Madi and Mom

Shadow..ear infection oh my. Painful but curable...Great news Years ago my daughter had a similar experience with her first Cornish Rex. Cali was sneezing continuously and nose dripping. The worst day was the day they left her at the vet for a CAT scan looking for a tumor. They gave my daughter a pager so that she could be reached for an immediate decision during the test. It was an infection too. Madi and Mom

Nice shot...I've never tried playing with a cotton ball, I guess maybe I'll have to give it a try!

We used to like tin foil balls but got bored wif em. Den we liked milk cap rings and yup we gots bored wif dem. Now we LOVE fevvers!! And catnip too. We hasnt tried cotton balls yet ...

I'm so glad they know what's wrong with Shadow. I hope she feels better soon. Poor kitty!
Barney out with the other kitties? Wow, I hope they are nice to him. with Toeshee, I kept him in his upstairs "nursery" at night to protect the other cats! He was a mean little kitten!
That is the second tag with that theme I have received! I really need to do that! Oops!
Virgil's picture is very cute!
Happy Weekend!
Lorianna

That's a great picture of Virgil with the cotton ball!

We are so glad they figured out what's wrong with Shadow. Now let's hope she gets better fast!

We're very glad to hear about Shadow - and we LOVE the photo of Virgil (we also think your avatar photo is adorable).

P.S. We have a cat toy called a Crinkle Ball which is similar to a pom pom but is made with layers of mylar along with the fuzz. It is really sturdy and none of the cats have been able to eat either the fuzz or mylar (and they try with both).