Ok so let me start out by saying that all humans and cats are fine. The reason I haven't posted in a while is that we had a pretty major fire at our house.  I don't want to get into it too much but it was related to the dryer (not the vents) and the laundry room is trashed.  Unfortunately the electrical panel, HAC, and water heater are in that room.  Fortunately I remembered to close the door to the room so the fire didn't spread.  The garage got a crazy amount of smoke damage (it was the shortest distance for the firemen to get to the fire) and the rest of the house has (mostly) smoke and (downstairs) water damage.  The cats were freaked out a LOT but all are ok - the firemen let me in after it was out to get them. It took a little while because they were scared but I got them all in carriers and in the car.  We are staying at Brad's parents house until who knows when (the fire was on 9/21 and they haven't started any work yet - don't get me started on that I am so angry it isn't even funny) and since they have a dog (who is afraid of cats) and since his dad is allergic all the cats are staying in one pretty small room.  They have been great so far though - a few fights but mostly they are being nice to each other.  I am going insane but the cats seem ok.

The funny thing is Lola is doing great - her blood sugar is down a lot and I think that is because of the low carb diet.  I check her daily and she is totally good with all of it - it is pretty amazing actually.

And honestly, she was the one cat who was calm during the fire - the only one the firemen actually found and carried out - and my neighbor held her and she just was totally calm.  She is kind of a lump (never really into playing even as a kitten - if you bring the toy she will play but she won't get up to play - or even for treats - bring them over she eats them, but if she has to make an effort, eh, she doesn't need it).  I think that she is the most brave of the cats and I think that is part of why she is ok with the pokes and everything. I think she also knows it is helping her.

So anyway, the other issue with having to stay at Brad's parents is that the internet here is terrible - well, that or my computer is having issues (which is a possibility) so I won't get to post too much.  I am hoping to be in our house soon but at this point if we are in by Christmas it will be a miracle (and not because of the work to be done but because of the people involved - don't ask).

But in the mean time here are some pics of the kitties in our temporary home (sorry it is so messy but it is a really small room with Brad's parents stuff, my stuff and the cats stuff, plus the cats) and also a bonus picture of Sonny Rio, Brad's parents dog. 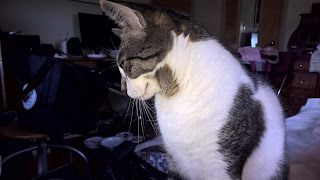 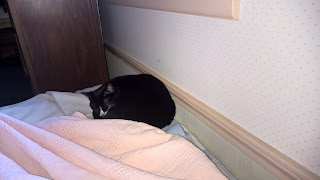 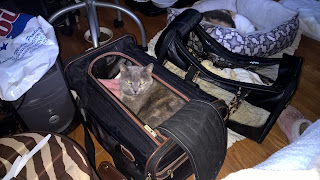 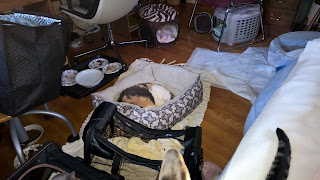 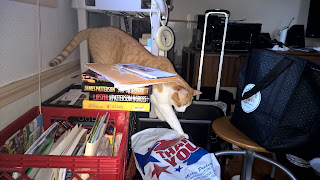 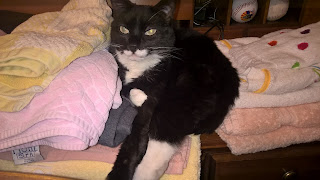 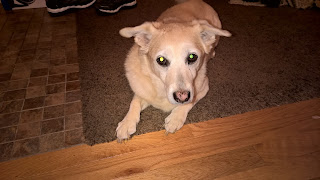 How awful! Thankfully no one was hurt!

Ugh, how awful! At least no one was hurt and the damage is repairable. (We live in a fire area so my human worries a lot about hillside fires.) I'm glad Lola is doing so well, at least!


We are so relieved to hear no-one was hurt! But, oh! How scary it must have been for all of you!

Oh my word! I am SO glad everyone is ok. That is the most important thing. I hope repairs are started in a hurry.

Thank goodness you are okay! We sure do hope things get back to normal soon.

Oh my gosh! Hugs hugs hugs!!! I'm so glad you're all ok! But wow! What an ordeal! We're sending you lots of prayers and love and hope that you get back to normal as soon as possible!

Oh, my goodness. We are so glad you are all okay and have somewhere to stay for the moment! Sorry the house is a mess. Sure hope it's repaired soon so you can move back in. There is no place like home! A warm hug.

We are so sorry to hear about the fire! We are glad you are all safe, and that the damage can be fixed. Hugs, purrs and prayers to you all.

Thank goodness everyone is OK.
Hope the repairs are done sooner than expected.
Big purrs

I am happy that every one is OK. Hopefully you will be back in your home by the first of the year

I'm very glad no one was hurt or lost!

So much to be thankful for there, especially the kitties all getting along, but I can still feel for you for all that went wrong. I hope everyone gets everything together soon and you are back in your house by Christmas.