Hi Everyone! So I am getting caught up but still have some I haven't visited (I think) and that is frustrating me. My job sucks and the people are super jerks, and that is frustrating too. Then today at around noon I noticed a sudden run of emails on my phone - when I got a chance to look at them there were 5 emails from PayPal about the transactions I had made being approved - except I didn't make the transactions .So I am super pissed. I am not a fan of paypal and only had it because one store I shop at uses it for check out and because if I want to donate to CB things that usually requres Paypal. So I had to cancel my card, deal with my bank and paypal all because there are jerks out there. As soon as this is resolved Paypal won't be seeing me again. I am sad because it will make it tough to donate to CB stuff but I can't risk it after this - this is my second problem with paypal, though lucky for me the first involving money. Everyone who uses it please be careful.

The other thing that frustrates me - Trixie is a rambunctious girlcat who I have to keep stopping from playing because she should be resting right now since it is just over a week since her surgery! She is just having so much fun now - she gets along so well with all the other cats and wants to play and chase and jump and I have to keep stopping her. She is such a happy girl (right now I have Trixie and Kirzon - youngest and oldest - sitting on my lap).  Shoot - I have to get Lola out of her room (I changed cat litter and didn't want to let her out til after, then I sat down to blog because I forgot). Ok, so anyway, Trixie is a sweetie and she loves to climb up on Brad's bikes, which are in the kitchen. Luckily she climbs onto them and doesn't jump up so at least that is one thing I don't have to worry about - she climbs back down too. She likes to jump but at least that she is taking it easy with!

So, lucky for me I managed to get some pictures of her on the bike - she is the only one tiny enough to do it I guess. Virgil liked to sit up there too, but hasn't done it in a while - maybe he will start again.

Anyway, here are the pics - I need to get Lola out now! 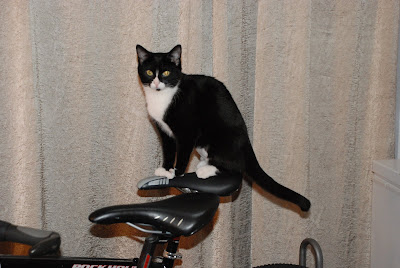 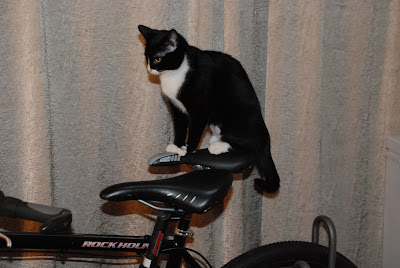 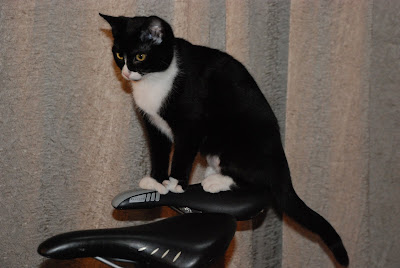 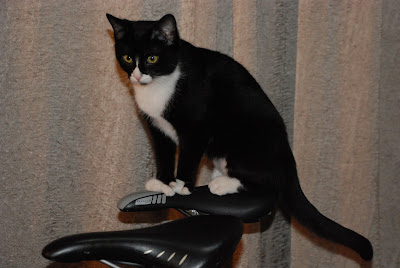 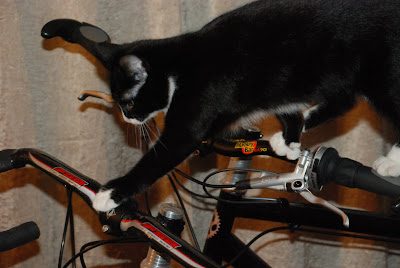 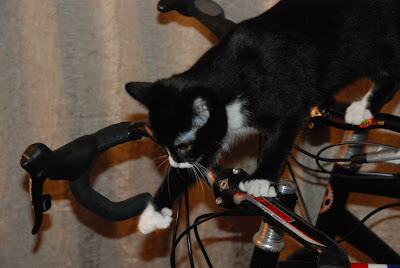 Sorry to hear that you had problems with PP.
You can never be too careful that is for sure!

Trixie is such a cutie!

It's pretty hard to keep an active kitty down - I was impossible to keep quiet after my spay! But I healed fine. That sucks about PayPal - we use it for business stuff sometimes, but we are very careful.

Trixie is such an adventurous (cute!) little girl!

We are sorry that somebody got into your PayPal. Hackers could actually do good things if they decided to make their money legitimately.

Sorry to hear about your PayPal issues; hope it gets cleared up soon...Trixie is adorable, glad she is healing and doing so well...Have a great week, lovely friends...xoxo...Calle, Halle, Sukki

Sorry to hear about the PayPal troubles! Good thing you caught it so fast.

Trixie is such a cute biker babe!

We fell bad that your jobbie is so bad. It's a shame you don't get paid for lovvin on your kitties, then you could quit!

Trixie will be fine, most of us were wild after our spays, and CC had to have an internal testicle removed and it never slowed him down one bit.

Hang in there from all of us! Cute pictures of Trixie on the bike :D

Our mom is a former cycling geek and just from the glimpse of Brad's bikes, she has bike envy, mol!

I understand your frustrations- sorry :(

Anakin and I have been trying to make our rounds to everyone as well, trying to get caught up-
we were laughing at your ketchup comment on our bloggy- we like to say that too- very cute-

Wow! Your having a worse day than me..and I thought I had it bad. So sorry for all yur troubles..but glad you took the time to blog.

Trixie you are a little darling. You look like you should be on T.V.

Soory about Paypal ~ so annoying. I hope you get it all sorted out.

We love that picture of Trixie on a bike. Our human has an exercise bike and We like to jump up and sit on it (well, Pixie does, anyway) and watch our human hard at work on the computer (especially if she's blogging about Us - MOL).
Trixie - We do so understand that you want to play and don't want to rest, but We have learned from experience (being - ahem - quite mature kitties) that it's not a good idea to try to do things too fast when you've been sick or had surgery or anything like that. Now is the time to let your human spoil you while you just sit back and relax.

Wishing you a speedy recovery,

Your new friends from Jerusalem,

I am so sorry about the paypal problems - how awful :-(! It shows how easily determined crooks can hack into people's accounts! I hope you get your monies back and I hope you get treated well by your banks and paypal!! Hugs!

Awwww Trixie sounds so adorable and lovely!! I love that she and Kirzon are on your lap - that's so sweet!!! Hello too to sweet Barney, Virgil, Gus and Stella!

And of course special huggles to the always adorable Lola! Take care
x

We're sorry to hear about your Paypal problems - hope they get sorted out pronto.
We hope Trixie makes it through without bursting her stitches - is she going to be a champion cyclist
Luv Hannah and Lucy xx xx

That sucks about Paypal. I don't blame you for ditching it.

Maybe Trixie can sit on the bike because she has so many extra toes? LOL.

I don't use PayPal anymore cause of some problems I had.Love the biker girl photos :)

Sorry to hear about your job. That doesn't make for a fun day.... Beth won't use Paypal....she said she has heard too many bad things about it....

::hugs:: We've been using PP for ages & haven't had a problem. So sorry that you have! Ours is connected to an account rather than a card so I don't know if that is a factor or not. How much longer do you need to keep Trixie calm?? She looks sooooo sweet!!

Sounds like your life is just a little hectic right now. Trixie, you do look like you are ready to go for a ride on that bike. That would a fun thing to do.
That is too bad about Pay pal, that is for sure. There must be other ways to help the CB. Take care.

Some people think Jan is paranoid because she won't give PP a debit card # to "verify her address," but she's heard too many bad things about PP too. Sorry you had such a problem with it! Thanks for posting about it.

Hope things get better for you at work.

Cute photos of Trixie on the bike.

Oh man- our dad had problems once with paypal- but they called him to tell him someone was taking money- and canceled it before it became an issue. mom is always nervous about it though.

And sorry that you are having problems at work with people, mom says she knows what that is like. We think you shouldnt have to deal with that kind of stress. When mom changed jobs to one with good people- she became a different person! And everyone noticed how happy she is now!

Trixie is just an inquisitive little sweetie. Hopefully she will heal quickly. Hopefully Lola wasn't TOO mad about being left upstairs. Maybe with the coming of better weather and more sun, the folks you work with will be less grumpy...at least we hope so. I am not a fan of PayPal either!

Also sorry to hear that you're having problems with Paypal. Never fun when people do things they shouldn't. :(

I'm sorry to hear about your frustrations with work and PayPal! Hopefully everything will be worked out, and work will get better. I agree with BeadedTail..Trixie is one cute biker babe! :)