Purrs (and Grrs) for Herman 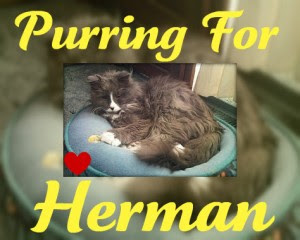 We are joining in today to purr for Herman, one of our kitty friends who is sick. We mentioned him on Friday, and the cat blogosphere is doing a big purrs for Herman today - and so of course we had to post about him again. We are also purring (and grring) for his mom, Karen Jo, who is doing such a good job of taking care of him. So, if you could send out lots of purrs and grrs for Herman, that would be awesome - you can read about him at his blog, Herman's Hideaway.
at 5/02/2010 12:01:00 AM

We are purring for Herman today and everyday; we really hope his condition improves...Hope you all have a lovely Sunday...xo...Calle, Halle, Sukki

I am purring for Herman and his human - they need all the support they can get!

We'll be purring too.

Thanks so much for participating is this special day for our special friend.

We're purring hard for Herman & Karen Jo, they are both very special!

We are purring and purring for Herman and his loving mother. We are also purring for God to take away all of Herman's pain and suffering.

NAK and The Residents of The Khottage Now With KhattleDog! said...

We've been khrossing paws fur both of them -

We're purring for Herman too! Thank you for visiting and being there for us. Wishing you a great day!

We will purr our furry best!

Our thoughts and prayers go out to Herman.

We are sending lots of purrs to Herman too. We just know that all these purrs will make him feel a little better.
Hope you have a wonderful day.

We had been away too long and only found out about Herman's condition today. We definitely send our purrs to sweet Herman

I am so sorry to hear that Herman is still in need of the prayers. I will go over right away and leave good wished and prayers for him. He is an old friends and I know Karen Jo is taking the bestest of care she can for him. The power of our prayers are sure to help him out.

We are purring, too!

Oh boy yes we will be purring for him. Guys don't forget to send us your mailing addy so we can have the company send you your product.