We are on Zoolatry! - Updated!!

Brad and I are headed out (we are geeks and we are going to see the new Star Trek movie this morning) but I wanted to mention how excited I am that we are on Zoolatry today! Look at the awesome picture they made for us!

Update: I am excited to see a few of you are going to see the movie too! I hope it turns out better for you - we had tickets to see the IMax version, and halfway through the movie the projector broke! It was the only theater in the area to be showing it in Imax, so we are mad (as are the others in the theater). We did luck out that a regular showing was starting right at the same time so we saw the whole thing there, and got rainchecks, but we are very angry!! But, I have to say, the movie is AWESOME!! We actually took the day off (I literally asked for today off as soon as I found out the release date - it is a tradition to see the first showing on the first day of release) just to see it today, early in the day in Imax, so it was a disapointment.

Also, I had thought I had linked the Zoolatry picture to the blog posting on the site, but since I did it right before we left I didn't get it right - I think I have fixed that.

Anyway, I am going to have some new Virgil pics later on - I have some pictures of him looking out the door, so I plan to post that and one from Halloween where he was doing the same thing - to compare his size. I will have those soon!! 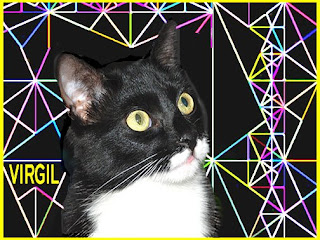 That is so cool! They made one for me too. Enjoy the movie.

Virgil, you are a handsome cat! We love Zoolatry's graphics are wonderful.

Wonderful Pic... Mom and Dad want to see that movie... but have to wait till Dad comes home to see it.. by then it should be on DVD

Mom has to wait for Dad to get home before they can go see it... It is killing Dad to wait till they can see it together! Love the pic!

Thanks for visiting my blog. That's a good picture of Virgil.

That is really cool photo of you! Zooaltry does such a great job! About Star Trek.... My mom loves the original series! Also, mom wanted to go see the movie... but after reading some Lost in Space fan posts about it she sort of changed her mind... now she is not sure what to do! Not having lots of the green stuff in supply she thinks it would be better to wait till she could get it at the library for free.???